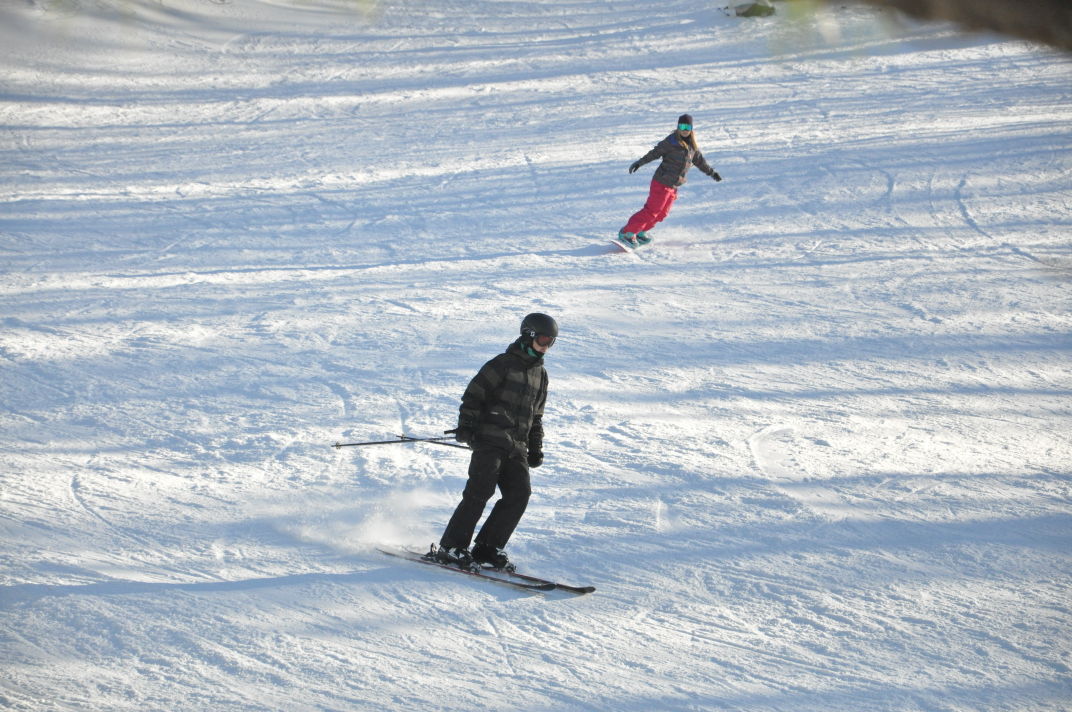 Skiers and snowboarders take advantage of clear, pristine conditions Jan. 5 as ski season ramps up in the High Country. 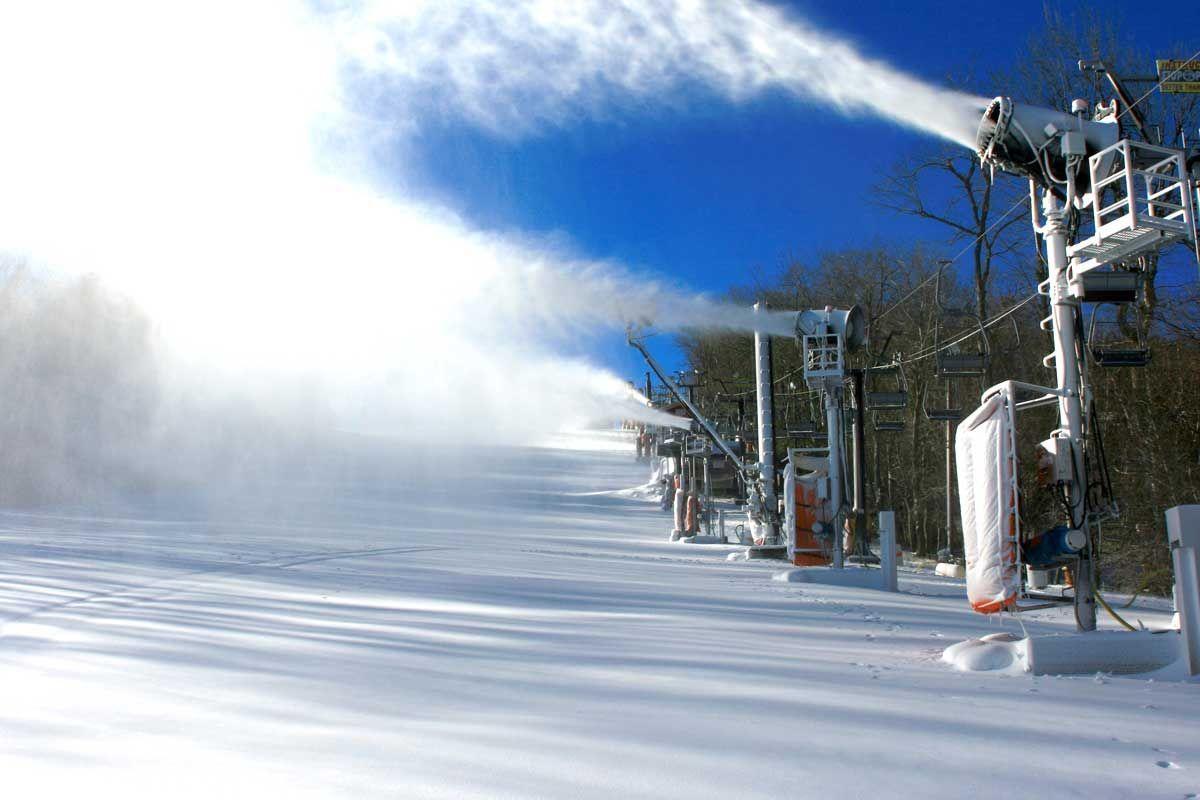 Snow guns at Appalachian Ski Mountain blast out fresh powder with the recent and long-awaited dip in temperatures. 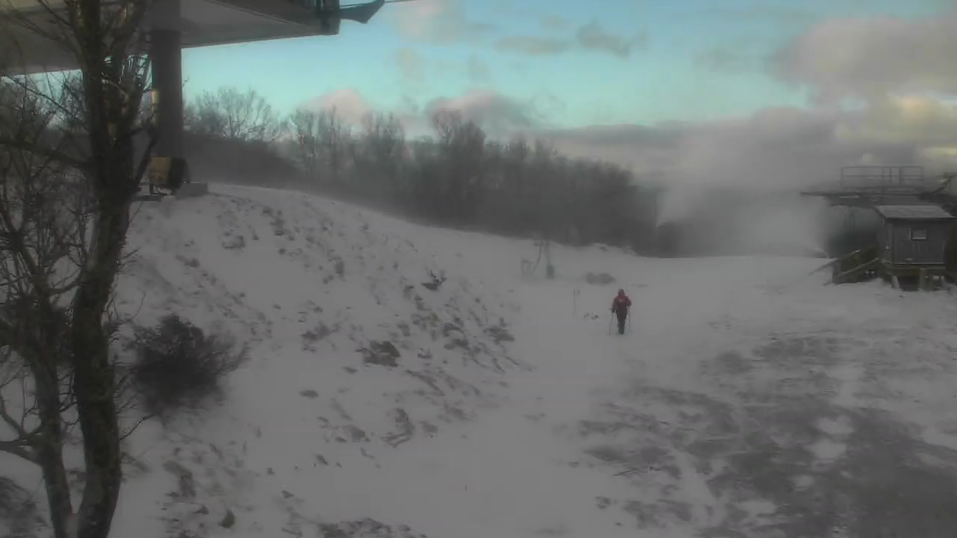 A single ski patrol member makes twilight rounds at the summit of Sugar mountain on Jan. 4. Sugar, Appalachian Ski Mountain, Beech Mountain and Hawksnest were all able to start blowing snow on the weekend of Jan. 2 and 3.

Skiers and snowboarders take advantage of clear, pristine conditions Jan. 5 as ski season ramps up in the High Country.

Snow guns at Appalachian Ski Mountain blast out fresh powder with the recent and long-awaited dip in temperatures.

A single ski patrol member makes twilight rounds at the summit of Sugar mountain on Jan. 4. Sugar, Appalachian Ski Mountain, Beech Mountain and Hawksnest were all able to start blowing snow on the weekend of Jan. 2 and 3.

BOONE — On Monday morning, Jan. 4, High Country residents awoke to a sight which has been oddly absent for the first few weeks of winter.

For some, the return of cold temperatures and snowfall is seen as nothing more than an inconvenience to business and travel.

For others, such as owners and employees at ski resorts across the area, the overdue renewal of seasonal weather patterns is a welcome sight indeed.

After an unseasonably warm December, many such businesses, as well as those who rely on them, greeted the past weekend’s cold snap with a sense of relief.

During the past weekend, snowblowers at Appalachian Ski Mountain, Beech Mountain and Sugar Mountain were working overtime, utilizing the icy temperatures to establish fresh layers of powder to kick off the ski season in earnest.

According to Beech Mountain Resort Marketing Director Talia Freeman, the weekend of Jan. 2 and 3 saw a resurgence of skiers on Beech. With five of the 15 slopes open during the weekend, skiers of every skill level had opportunities to take a ride.

“This weekend was busy, so we’re happy,” Freeman said. “We have a lot of different restaurants here, scenic lift rides and our ski shop open. I think that we’re going to have a really good January and Feburary. It looks like the weather is turning around, so we’re excited. A lot of people are just pushing their trips back and that is fine with us.”

As of Monday, Jan. 4, Sugar Mountain had six of its 21 slopes open for skiers and snowboarders, with hopes of opening more by the following weekend.

Webcams showed a flurry of activity at the base of the mountain, as snow sport enthusiasts lined up for the lifts.

“We had a terrific weekend. Saturday was very busy,” Sugar Mountain Vice President Kim Jochl said. “Lots of people finally got the opportunity to ski and snowboard.”

In addition to opening its ski slopes for the fifth time this season, the resort also had ice skaters out on its refrigerated skating rink.

For the coming weekend, the resort will offer guided snowshoe tours in addition to regular activities such as skiing and snowboarding.

Jochl said that the resort hopes to have two of its larger slopes open this week, Big Birch and Gunther’s Way.

With snow blowing full speed, Jochl says that the turbo-powered lift has been “a big hit.”

For Appalachian Ski Mountain, the cold weather allowed the resort to host the North Carolina Special Olympics Winter Games during Jan. 3 and 4, which had been in jeopardy of cancellation due to the prior warm weather.

On Jan. 4, the resort had seven of 10 slopes open and Appalachian Ski Mountain President Brad Moretz expects that more will open throughout the week.

“We opened up on Sunday and had a fantastic day and night,” Moretz said. “We’re making snow all day today and have a great snowmaking forecast for the next couple of days. I’m sure we’ll make several feet during this time, so we should be in great shape for the rest of the season.”

During the Winter Games, more than 140 athletes and coaches from across North Carolina and from Virginia took to the slopes for two days of fun and friendship.

“Everybody left here happy. We had great ski conditions and who would have thought that three days ago?” Cottrell said. “Yesterday (Jan. 3) was perfect. It was about 40 degrees and the snow was really good. Monday was a little colder, but everybody handled it really well and a good time was had by all.”

Unlike many businesses which rely on a particular type of weather to operate, Hawksnest has the best of both worlds.

According to owner Lenny Cottom, his business can easily weather the transition between warm and cold temperatures due to its dual-business model, which incorporates a combination of zipline tours and snow tubing.

“We haven’t had any snowtubing guests, but we’ve been booked solid for the zip lines,” Cottom said. “It’s been good to have something for people to do when we didn’t have the snow.”

Cottom anticipates that snow tubing will pick up in the next few weeks, as cool temperatures allow Hawksnest to blow more snow.

With lows in the 20s predicted for much of the coming week, conditions should allow the resorts to continue with snow blowing.

Although December 2015 was not kind to the slopes, January is shaping up to be a better month for the tourism industry in general.